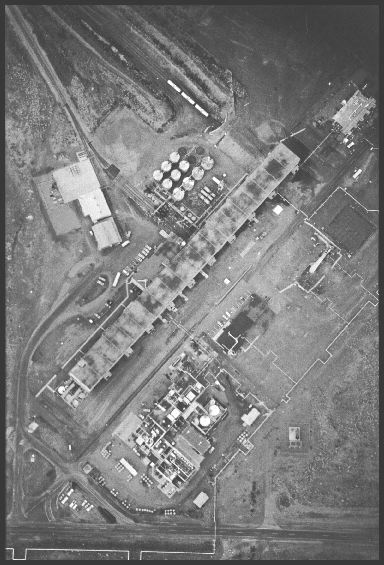 A reprocessing plant is a chemical factory for separating plutonium from spent fuel discharged from a nuclear reactor. Eight American reprocessing plants operated during the Cold War, located at Hanford, Wahington; at Savannah River, South Carolina; and in Idaho.

The Hanford "B" canyon, pictured here, was the first large-scale reprocessing plant in the world. Spent fuel from the Hanford "B" reactor was chopped into pieces (using robotic equipment) and dissolved in boiling nitric acid; then the plutonium was chemically extracted from the corrosive, highly radioactive acid solution in an elongated gravity-fed remote controlled chemical plant called a "canyon". The "B" canyon extracted plutonium that was subsequently used in the Trinity bomb (June 14, 1945) and the Nagasaki bomb (August 9, 1945).

Today the B plant houses the Waste Encapsulation Storage Facility, which packages cesium-137 (left over from the bomb program) in metal capsules for use in America's commercial food-irradiation industry.

photo by Robert Del Tredici from his book entitled
At Work in the Fields of the Bomb (Harper & Row, 1987)