Hot Leftovers from a Cold War
Plutonium Imports to Canada 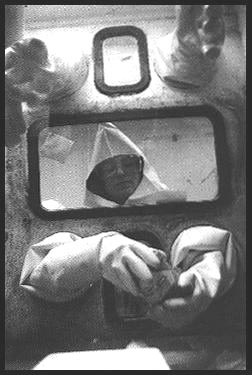 The woman in the white suit is handling plutonium
in a sealed "glove box" to protect herself from contact
with even the minutest speck of plutonium. MOX fuel
has to be fabricated this way, making it much more
expensive than regular uranium fuel, even if the
plutonium for the MOX is donated.

Hot Leftovers from a Cold War

Some time this summer, two shipments of weapons-grade plutonium fuel -- one from the U.S.A., one from Russia -- are expected to enter Canada. They are to be trucked to Chalk River (Ontario) to be "tested" in a research reactor. If the test succeeds, Canada may import up to 100 tons of weapons plutonium from the two superpowers over the next 25 years -- all of it extracted from obsolete nuclear warheads.

Question: when, by whom, and why, was this grandiose plan devised?

Answer: about 6 years ago, by Atomic Energy of Canada Limited (AECL) , to gain practical experience in using plutonium as a fuel on a commercial scale.

In December 1994, in Washington D.C., AECL submitted a report to the U.S. Department of Energy, suggesting that up to 50 tons of excess US weapons plutonium could be used to fuel Ontario Hydro's Bruce "A" nuclear reactors. Canadians would be left with the resulting high-level radioactive wastes.

In April 1996, in Moscow, Prime Minister Chrétien signed a document obliging Canada to consider importing up to 50 tons of weapons-derived plutonium from Russian warheads for the same purpose.

With no mandate from the Canadian population, the Liberal party, the provincial Premiers, or the House of Commons, the Chrétien cabinet has decreed that Canada is, in principle, in favour of "burning" excess weapons-derived plutonium in Canadian CANDU reactors. It's called the "CANDU MOX Proposal".

[ MOX stands for "mixed-oxide fuel", so named because oxides of plutonium and uranium are mixed together. ]

Well, it sounds like a good idea, doesn't it? Burn up the plutonium? Make the world a safer place? Help rid the world of nuclear weapons? Do our part for disarmament?

But things are not as simple as they seem. It turns out that neither AECL nor Ottawa wants to get rid of plutonium altogether. They are not, and have never been, against the production and use of plutonium. Indeed, they view plutonium as a valuable commodity -- a vital nuclear fuel of the future. Rather than eliminating plutonium, they have long dreamed of commercializing it. The realization of this dream, however, may usher in an age of unparalleled nuclear weapons proliferation.

Now is the time for Canadians to insist on full public consultation, dealing with all risks and benefits associated with the MOX Proposal. Millions of tax dollars have already been spent. Weapons-usable material may soon be moving over Canadian highways, posing unprecedented security risks. 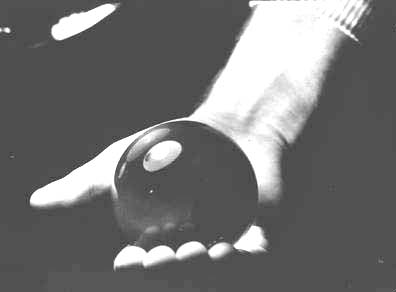 This glass ball, 3.2 inches across, is the exact size
of the plutonium core in the bomb that exploded
over Nagasaki on August 9, 1945, with a force
equivalent to 22,000 tons of TNT.

Why are the public and parliament denied an opportunity to provide input on the fundamental policy questions, before the trucks start rolling? Do Canadians want to import these hot leftovers from the Cold War?

Some Discoveries and A Recommendation

Last year, during public hearings on Canada's policies regarding nuclear weapons, a House of Commons Committee discovered that:

In December 1998, the all-party House Committee on Foreign Affairs unanimously recommended that the MOX Proposal be scrapped -- a recommendation the government has flatly rejected.

The Chrétien cabinet is determined to proceed with the MOX Proposal. Ottawa has no intention to consult Canadians for another five or six years -- after most of the political and technical infrastructure is in place.

Back to the Future

What many Canadians don't realize is that a previous AECL plan to use plutonium fuel was turned down more than 20 years ago in the Trudeau era.

On February 28, 1977, eager officials from AECL organized a day-long seminar to convince top civil servants in Ottawa of the "urgent" need to start using plutonium fuel in Canada. The rationale had nothing to do with nuclear weapons; it was a purely commercial plan to strengthen the nuclear industry.

"authorities all over the world are proceeding with understandable caution in the face of the bad name undeservedly attached to plutonium ... but plutonium is an extremely useful material and we will be dealing in it."

The black star in the photo shows the tracks made in 48 hours
by alpha rays from a microscopic particle of plutonium
lodged in the lung tissue of an ape. Alpha rays don't
travel far, but they are much more damaging than
other types of atomic radiation. A single
radiation-damaged cell can develop
into a fatal lung cancer.

The 1977 Plan called for $2 billion in government funds to build a "Fuel Cycle Center", including:

The notion of burying nuclear wastes without first extracting the plutonium was not even considered. As John Foster put it:

"I have not said much about the waste disposal aspect. This is not because it is not important -- it is extremely important; but it is a part of the total [ plutonium recycle ] program. It cannot be dissociated from the fuel cycle program."

But one year later, in 1978, AECL's Plan was in tatters, as a result of a dizzying combination of national and international events:

These were all, in a sense, delayed reactions -- repercussions from an event that took place four years earlier. In 1974, India had stunned the world by exploding an Atomic Bomb using plutonium from a research reactor.

The CIRUS   [ Canada-India Reactor with US help ]   reactor was a gift from Canada; it was a clone of the first large research reactor (the NRX) built in Canada. India used the Canadian CIRUS reactor to produce plutonium, then separated the plutonium from the spent fuel using reprocessing technology given by the U.S. The main difficulty in building a nuclear weapon -- obtaining nuclear explosive material -- had been solved through foreign aid programs, thanks to the myth of the "Peaceful Atom".

After the blast, the message seemed obvious: when plutonium is readily available, it is easy to build weapons on the sly. In 1977, the Carter administration tried to close that loophole by eliminating civilian plutonium use at home and abroad.

But Carter's policy was attacked by nuclear proponents, including AECL, who had pinned their hopes on plutonium as the "fuel of the future". They argued that "reactor-grade" plutonium -- the kind produced by power reactors -- is not useful for making weapons and therefore should not be banned.

US officials repudiated this claim, labelling it a dangerous misconception.

Victor Gilinsky, one of five Commissioners appointed to the US Nuclear Regulatory Commission, expressed the Carter Administration's position succinctly:

"There is an old notion, recently revived in certain quarters, that so-called 'reactor-grade' plutonium is not suitable to the manufacture of nuclear weapons . . . . The fact is that reactor-grade plutonium may be used for nuclear warheads at all levels of technical sophistication. . . . Whatever we might once have thought, we now know that even simple designs, albeit with some uncertainties in yield, can serve as effective, highly powerful weapons -- reliably in the kiloton range."

In July 1977, the US government revealed that it had carried out a nuclear weapons test in 1962 using reactor-grade plutonium.

Ottawa prudently withheld approval for AECL's Fuel Cycle Centre, although the Government of Canada never shared the US view that civilian use of plutonium must be opposed as a matter of principle.

In July 1978, the governments of Canada and Ontario signed an Agreement giving AECL a mandate to develop technology for a Geologic Repository for high-level radioactive waste, euphemistically called "used nuclear fuel". Although reprocessing (separating plutonium from used fuel) was not approved, AECL was instructed to include "glassified post-reprocessing waste" in its research work. The plutonium fuel option was explicitly left open.

In the intervening decades, AECL ran a small plutonium fuel fabrication facility at Chalk River, manufacturing about three tons of MOX fuel and testing it in Canadian reactors. At the Whiteshell Nuclear Research Centre, in Manitoba, AECL experimented with glassification of liquid wastes left over from reprocessing as part of the Geologic Disposal program. The 1977 Plan was evidently not dead; it was just in limbo.

Today, the world is on the brink of a plutonium economy. Japan, India, Russia, France, and England have large stockpiles of plutonium which they want to use as reactor fuel. The use of MOX in Canada will be a green light for plutonium use abroad. And once plutonium becomes widely used, it will -- like all commercially traded commodities -- become readily available to criminals, terrorist groups, and rogue states.

The Canadian Coalition for Nuclear Responsibility believes that disarmament is neither the motive nor the meaning of AECL's MOX Proposal. Rather, it is a convenient cover, providing an opportunity for AECL to realize a decades-old dream: to move towards a plutonium economy.

Canadians are paying the bills. Their children will inherit the wastes.

They must be given a say.

Gordon Edwards is President of the Canadian Coalition for Nuclear Responsibility. He graduated with a gold medal in Mathematics and Physics from the University of Toronto, and holds a Ph.D. in Mathematics from Queen's University in Kingston. He has acted as a consultant on nuclear issues for governmental and non-governmental bodies since 1976. He teaches Mathematics at Vanier College in Montreal.