The Canadian Coalition for Nuclear Responsibility (CCNR) has been active for thirty-eight years as a voluntary organization dedicated to demystifying the issues surrounding nuclear power so that ordinary citizens and decision makers can better understand the nature of the unique hazards surrounding this technology based on an adequate understanding of the scientific facts.

Presumably, the Parliament of Canada once had high hopes that the Canadian Nuclear Safety Commission (CNSC) would fulfill an educational function along these lines. For in passing the Nuclear Safety and Control Act, Parliament specified two categories of responsibilities for the newly-created CNSC, all laid out in Article 9 of the Act. The first category of responsibilities is protective in nature, whereas the second category is educational in intent.

9. The objects of the Commission are

(a) to regulate the development, production and use of nuclear energy . . . in order to

(b) to disseminate objective scientific, technical and regulatory information to the public concerning . . . the effects, on the environment and on the health and safety of persons, of the development, production, possession and use referred to in paragraph (a).

However, it appears that the Commission has chosen to ignore this latter portion [9(b)] of its mandate, as there is virtually no effort made by the CNSC to disseminate objective scientific information to the public concerning the health and safety of residents in the event of a major malfunction at one of their licensed facilities. Moreover, in public presentations made by the CNSC outlining its role and detailing its mandate, it is routinely the case that no mention whatsoever is made of the CNSC's legal obligation to disseminate objective scientific information concerning the risks of nuclear technology.

During a recent public hearing having to do with the proposed refurbishment of the Darlington reactors, the Commission allowed both the licensee and the CNSC staff to dodge important questions having vital ramifications in terms of environmental contamination and public health and safety -- see the appendix to this submission, where the evasions are documented using the transcript of that hearing.

So, not only does the CNSC fail to disseminate objective information about risks to public health and the environment, the Commission does not even require the experts on whose evidence it depends to give clear and unequivocal answers to vital questions related to safety. Those experts, some drawn from the nuclear enterprises that the CNSC licenses, others functioning as members of the CNSC staff, seem without exception to be ardent supporters of nuclear power. Yet the Commission members seem oblivious to the bias that this pro-nuclear commitment introduces into the experts' judgments and analyses. The echo chamber of endlessly-repeated reassurances that nuclear power is safe, is safe, is safe, despite all evidence to the contrary, leads quite readily to a "conspiracy of the like-minded" -- as Albert Einstein once remarked, "The splitting of the atom has changed everything, except mankind's way of thinking, and so we drift towards unparalleled catastrophe". 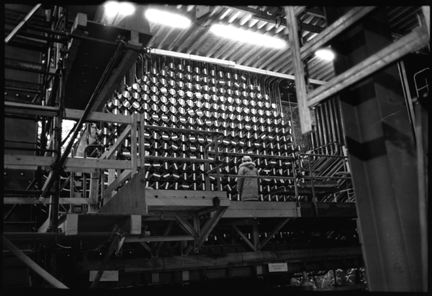 The core of a CANDU reactor is a large cylindrical vessel called a "calandria" with hundreds of horizontal "pressure tubes" running through it, each surrounded by a "calandria tube", and each connected to small diameter pipes at each end called "feeder pipes". The core area is so radioactive that it is very difficult -- virtually impossible -- to verify the condition of all of these tubes and pipes. Photo: Robert Del Tredici.

Here is what seems apparent to the CCNR regarding the application of Ontario Power Generation (OPG) to run the Pickering reactors beyond their intended lifetimes.

(1) Various CANDU reactors (such as those at Bruce and Point Lepreau) have undergone multibillion dollar refurbishments which have included the replacement of thousands of contaminated and deteriorating pipes and tubes -- in particular, all of the pressure tubes and calandria tubes, as well as feeder pipes.

(2) One of the reasons for replacing all these pipes and tubes is because it is not practicable to determine which of them have become genuinely unsafe and therefore likely to fail, due to the high radiation fields experienced in the core area and the geometrical close-packing of many of these components.

(3) The multibillion dollar price tag for refurbishment is regarded as a worthwhile investment partly because the cost of a major nuclear accident may be two or more orders of magnitude larger, thus the cost of prevention seems justified.

(4) Ontario Power Generation (OPG) has received permission from CNSC to proceed with the refurbishment of the four Darlington reactors on the understanding that this will help to restore those reactors to a safer condition. [Refurbishment involves replacing all of the pressure tubes, calandria tubes and feeder pipes with new ones.]

(5) OPG has already decided -- based in part on the dismal experience with the Pickering A reactors -- not to refurbish the Pickering B reactors but to retire them instead.

(6) Now OPG is seeking permission to run the Pickering B reactors past their designed lifetime, after having previously decided not to refurbish those reactors.

CCNR is opposed to this application by OPG. OPG has already decided the fate of the Pickering B reactors. Now it wants to change the rules. The safety case for running the Pickering B reactors beyond their design lifetime of 210,000 full-power hours is necessarily based on highly unreliable and extremely limited data, because no one is able to determine the exact condition of any more than a very small fraction of the thousands of pipes and tubes that are part and parcel of the primary cooling circuit. To pretend otherwise is to turn our back on evidence-based science, and subscribe instead to the wishful thinking of nuclear enthusiasts buoyed up by untestable mathematical models and expressed with a patina of false precision.

CCNR urges the Commissioners to deliberate on the following sage words uttered by Thierry Vandal, then CEO of Hydro Quebec, in testimony before a Parliamentary Commission at the National Assembly in Quebec City on January 29, 2013. His testimony has to do with the option of running the Gentilly-2 nuclear reactor up to or even beyond its designed lifetime of 210,000 full-power hours.

"This is an important issue and I would like to take the time to explain it well. While it is true that we have an operating license from the CNSC valid until 2016, it is not true, unfortunately, that we can operate this power plant until 2016. The permit that we received for continued operation included an important condition, I think, No. 16, that there be a mandatory stop at the end of 2012, after which we would do one of two things: either we would shut down the plant, which is what we have done, or we would begin the refurbishment.

"And then we looked at this question in the context of what, for us, is the ultimate date -- what I would call the extreme limit of operation -- the 210,000 hours, which is the design value for this power plant. When we shut down the plant [on December 29 2012], we were almost there, within a few hours, having run the plant for 198,000 hours since the very beginning. These are the hours of operation at full power. It is a measure of aging, if you will, of the plant components. This is the nuclear plant [in Canada] with the most hours, the plant that has run the longest at full power: 198,000 hours.

"So, for how many hours could we continue to operate from a safety point of view? You've talked a lot [in these hearings] about safety issues, but I can tell you that Hydro-Québec's management in no way would have considered going beyond 210,000 hours even if it was made possible by the design. I would no more operate Gentilly-2 beyond 210,000 hours than I would climb onto an airplane that does not have its permits and that does not meet the standards. So, it is out of question for us to put anyone, i.e. us, the workers, the public, and the company, in a situation of risk in the nuclear domain.

"So this deadline of 210,000 hours, this is a hard deadline. We looked to see if we would have been able to work right up to the 210,000 hours, i.e. to go from 198 000 to 210 000 hours, that is to say. But what that meant, what that would require -- it would have required us, right now, to have a major shutdown -- a shutdown, a major outage with significant investments in order to convince the Canadian Nuclear Safety Commission to let us operate the plant a little longer. And we would have been able to operate one more year or so until 2014, somewhere in the second half of 2014.

"During that period, taking into account the investment and the operating costs along with the capacity factor that we could reasonably expect from this nuclear plant based on the experience of the past five years, we would have lost $ 300 million. It would have cost us $ 300 million to operate another year and a quarter in order to get to 210,000 hours."

Notice that Hydro-Quebec management decided emphatically against operating the Gentilly-2 reactor past its design lifetime, but was tempted to consider running it for another few months just to bring it up to the limiting time of 210,000 hours.

CCNR hopes that the Commission members will show the same degree of prudence when it comes to a decision on the OPG proposal to run the Pickering reactors past their limiting lifetimes.

CNSC should deny the OPG proposal to run the Pickering reactors past their designated design lifetime, based on the inherent limitation of the Pickering safety case because of the largely unknown condition of most of the pipes and tubes that make up the primary cooling system.

If CNSC decides to allow OPG to develop its safety case, then CCNR recommends that CNSC grant only a temporary licence for a short time period (such as 18 months) to allow OPG to do the necessary work.

In any event, CCNR is utterly opposed to the concept of relegating the ultimate licensing decision to a CNSC staff member, based on that staff person's judgment that OPG has succeeded in proving its safety case. Given the proximity of the Pickering reactors to the City of Toronto and its location on the shore of Lake Ontario, a public hearing is necessary to review OPG's safety case if and when it becomes available.

[ Accident Possibilities at Gentilly-2 and other CANDUs ]

[ Findings on CANDU Safety ] [ All About Meltdowns ]